Just think how many of us out there who doesn’t buy a mobile phone which doesn’t support the Internet? Well, honestly not many apparently. The Internet usage has increased lately breaking previous as we have several social media sites, apps like WhatsApp where you can voice clips using your android smartphone.

There are several voice and video calling apps which help you to connect any one from anywhere with Internet connectivity in a matter of seconds. Almost every calling app is now coming at free of cost. There are plenty of calling apps providing flawless connectivity.

Yeah, now you know that you have plenty of free video and audio calling apps available for free but there are so many apps out there and it is hard to choose which one is the right one for you. Despite having hundreds of calling apps, there are only few which does the job properly. 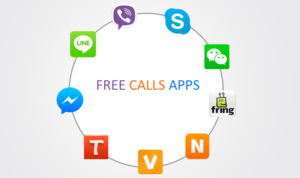 If you are one of those seekers then we suggest you check out our 8 Best Free Video Calling apps for Android Smartphone. Our list has 8 top calling apps for the android smartphone. Not only these apps are quality is good also it comes at free of cost. Some of them are coming from a well-known brand like Microsoft to ensure they are made for what they say.

The first one to hit our list is Viber Video Calling app is quite well known for its call quality. Viber is currently standing on top for the feature to make free calls using your android smartphone. They have more than 300M satisfied users who liked their services.

Viber offers their services on another platform as well including iOS, Windows, Linux more. This is how it actually works, you can make calls via Viber to Viber user. However, that doesn’t mean that you have to be on same hardware platform. You can make calls to viber (android device) to viber (iOS).

They have recently introduced a new feature so that you can make calls out of Viber app. In order to get access to this feature, you have to pay a little price to proceed with viber to any phone calling.

The service is not expensive, you can try it out as they have very affordable rates.

Microsoft wants to conquer every field including making free calls. This time, we are introducing Skype, which has been used by over 1B users worldwide. I have used skype as my primary way to connect people from another side of the country.

Skype quality is quite great when we are talking to someone from a complete country. As long as you have good Internet connectivity you never have to worry about missing a client.

Skype is available on multiple platforms like Android, iOS, Windows,Blackberry Linux, Mac and even on Symbian OS. The reason why I’m highlighting it because almost every OS can get access to this app, after all, it is free and this way you can run your conversation, business meeting or interviews.

Skype has been for several professional persons like job interviews, business deal, presentation, channels and more.

What we know is facebook is all about connecting people, doesn’t matter where and how the circumstances are. So they planned to release Messenger app so that they can connect people over as voice as well.

Almost everyone nowadays is on facebook. From friends, clients, business is on facebook. This is the best to connect with them when you run out of balance or to have a quick conversation over facebook.

Just one click can help you seal a deal. facebook constantly works on improving the app in several ways. so the app is always updated with new features and bugs fixed from time to time.

I have used Messenger personally, what I understood after having 40 minutes of conversation. You must have very good Internet connectivity to have a flawless conversation. In case if you have an average speed then you might face few seconds delay in each message.

Tango is another free calling app is also a top player in android market. Tango has been around for a while, having over 300 Million user base. So they know the requirements of each user on

Tango is yet another top performing free calling app in the Android market from a long time. Tango app was developed by TangoME Inc in 2009. It was initially developed for Android devices and later they also released on iOS, BlackBerry and kindle platforms too. The quality of calls in Tango is good and satisfactory. The best part of using Tango is, they also provide online games in their app. As of now, Tango has more than 300 million registered users around the world and more than 70 million active users every month. Tango also requires having installed its app on both ends of the users to make free calls and texting.

Imo Free Video Calling and chatting app which is now is among top players in every market today. What makes Imo special from the rest is that it has very good quality voice quality features.

ooVoo is all about making Video and voice calls over the Internet. The ooVoo has all major features the one which you can find on skype and rest of the apps, Ir also has some special features like stickers, emoticons, and funny characters. It makes both texting and voice chat easily. This app is about saving time and cost. ooVoo has covered over 100 million  user base. They have been into the market for a while and delivered what they offered standing tall with 4.4 ratings on Google play.

SOMA is a free video, voice and chatting app which has very decent features to try out. Soma can make free voice and video calls to another soma user. The main objective to release this app is to provide these features ads free.

SOMA app is a clean ad-free app so that you can have conversations with your friends and clients without getting interrupted.

Line is another cool best app to make free voice,video calls using an android smartphone. Line has very cool features to make calls for free both video and voice calling. You can send messages, share images, files and more.

Line comes with several other features like games, emoticons, stickers and funny faces. Line is available almost 200+ countries so that countries come between friends and clients. You can add your favorite celebrities to your list then you will receive their latest feeds and news about them.

Line was released on major platforms like Android and iPhone but later decided to share their services to another platform, which worked in their favor. Currently, it supports multiple platforms other than android like Blackberry, Symbian, mac, windows and linux.

As you can see there are several Best Free Video Calling apps for Android Smartphone. We have shortlisted few best calling apps so that you don’t have to worry to test out each app out.

As you have read, none of the apps can make calls to networks. Some of them do have this feature but they are allowing to do it only when you are purchasing few credits. However, Skype gives you the best value of calling other countries at a cheap price.

Now that we have saved you time and date. try any of the desired apps to make free calls.

HOW TO CHOOSE A GOOD GAMING DESK?

Why Educational Apps Need are Increasing for School Students?