Here we are providing you with the best battery saver apps for android Smartphone users, this list contains the top 5 apps that can be used as battery saver on your device. These apps lets your device run for more time and run efficiently. These apps can be used along with the Android Smartphone launchers that drain your battery for better performance.

Battery doctor stands first in the race for Best battery saver apps for Android when considered the number of downloads and positive review’s, it is developed by Cheetah Mobile Inc Corporation. It has many advanced features that will not be found in any other such apps, it has Charge master to monitor the status of charging, it has a widget for control over power saving, it has total control over apps that are responsible for power draining, it has powerful one tap power optimization button, it auto controls the device brightness for long run of battery, it has a unique 3 stage charging system, you can also schedule the timing for power saving mode, it shows exact remaining time for battery draining, exact time for fully charged battery, it provides you smart tips on battery charging, it shows the temperature of the battery while charging, you can also have a keen on forecasts and notifications, it has very simple user interface and it is supported by 28 different languages across globe. Battery Doctor is downloaded by more than 100 million Android Smartphone users and it is rated 4.5 out of 5. 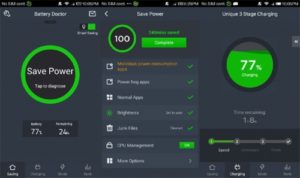 DU battery is the smartest battery saver app that is available on Google playstore, it is developed by DU App Studios. It is considered as the must have application on your Smartphone to Optimize the battery usage, it comes with many added features apart from saving the battery, it has a healthy charging manager to keep track of your Smartphone applications currently running and applications running on background, it has one tap boost widget to Optimize your phone with just a click, it has a unique Smart pre-set mode for choosing the appropriate time for battery saving, it shows accurate time remaining for battery charging and also time remaining for battery to drain, it has the simplest user interface and easy on go handling of apps optimization. DU Battery Saver is downloaded by more than 100 million Android Smartphone users and it is rated 4.5 out of 5.

Battery Saver by McAfee is a multipurpose battery saver and memory optimizer developed by McAfee (Intel Security) for your Android Smartphone’s and tablets. It works as a complete mobile and tablet optimization tool, it has many awesome features in it, it has a clean junk option that is used to clean the unwanted temporary files and Cache memory, it has a booster for speeding up your phone, it has a data manager who keeps all the accounts related to the mobile data usage, it has a monitor to keep track of the battery usage by different applications, it is featured with activity report card, that provides the brief information about the task, it has a toggle menu for sticky notifications, it has a one tap booster to optimize both memory and battery on a single click, it supports more than 15 languages. Battery Saver by McAfee is downloaded by more than 1 million Android Smartphone users and it is rated 4.3 out of 5.

Power pro as the name suggests it is one of the powerful battery savers available on Google playstore, it is developed by Psafe Technologia S.A. This battery saver provides there users with number of features along with battery optimization. Power pro can also be used to optimize memory, it is provided with two different battery saving modes 1. Balanced mode for moderate battery saving 2. Ultra mode for aggressive battery saving, this option is used in times when we don’t have enough battery backup and there is no other source. It has a smart sync option that can be used whenever it is plugged in for charging or connected to Wi-Fi, it has a night mode that is used for saving the battery when mobile is used less. Power pro-Battery saver is downloaded by more than 1 million Android Smartphone users and it is rated 4.6 out of 5.

Just battery is the highest rated battery saver app on Google App store, it is developed by LLC “Justmobi”. It has many advantages and features in it, it is provided with a task killer option that is not available in any of the battery save apps, you can kill any background app or running app completely using this battery saver, it is also provided with the quickest battery charging option, it has easy and on go use battery widget and it has many other features. Just Battery Saver is downloaded by more than 100 thousand Android Smartphone users and it is rated 4.7 out of 5.

That all folk’s, the above mentioned are the top 5 Best battery saver apps available on the Google Playstore, you can download any of them that is compatible with your device. This article is not written to favor any of the above application or its subsidiaries. Please do share and feel free to comment.

How To Mirror An Android Phone With Amazon Fire Stick?