In the race of smartphones, Android has contributed to a major piece of technology which rocked the current technology regime. A decade ago, no one has ever imagined having 5.5-inch screen to have the beast configuration, This very configuration is capable enough to run previous decade released operating system, not only that it can even run current latest OS. Today’s smartphone is reliable when it comes to multitasking, gaming and more. You can also run on PC using Android Emulators.

There are plenty of reasons why one would switch from PC to Android devices. There are several aspects. Everyone agrees with one statement that nothing can replace an actual laptop or Windows PC. 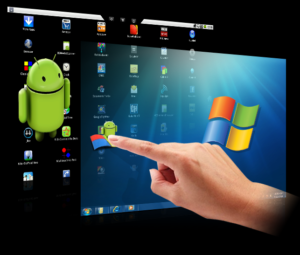 There are many users who like to be on Microsoft OS, Windows PC or Laptop. We cannot blame them for creating such an innovative operating system. At the same time, they want to use an Android smartphone, which is technically possible but it is the good distraction.

Now that we are in the new ERA of gadgets, the possibilities have increased even more after Android emulators have hit the android market.

Android emulators became very popular because it enables a user to run Android Apps and Games on Windows or Mac-based pc and laptop. Everyone has their own creativity reason why they want to use it on PC. The reason behind me using android emulator is that i want to play games on larger screen, not only that I’m tired of using touchscreen as it uses to keyboard touch.

Whatever the reason behind installing an android emulator on PC, you can play games and run Android apps smoothly without any issues. Don’t worry, if you have never heard of it. I will show you how to download and install from step-to-step.

What Is Android Emulator:

Android Emulator is a simulator which emulates android apps and games to run on PC. There are a lot of android emulators available but you have to choose the perfect emulator carefully if you make a mistake you end up experience lag and hang. You will also loose lots of megabytes and time.

To help you, we have shortlisted Top 8 Best Android Emulators for Your PC.

Bluestacks is the most popular android emulator. It is famous for its premium quality experience during and after usage. It has features which can run even larger file games smoothly.

Bluestacks has invested on their product for improvements and they have succeeded in adding new features and made the emulator even stronger than before.Current version emulator is now capable to handle more than three applications. They have improved graphics functions and allow you to play games at premium level. You won’t face any issues like lagging, frames or hang during the game.

Well go to the official site and download the installer. Now launch the installer then remaining necessary files will be downloaded meanwhile.

KOplayer Android Emulator is available in multiple platforms. This emulator runs all of the android related apps smoothly on your PC at free of charge. The program comes at free of cost so you don’t have to worry about your budget.

This program is good for those whose configuration is low because it is a lightweight emulator which is why it doesn’t put a toll on your PC. With this emulator, you can run all major apps like messenger, Whatsapp, twitter and more. You can even run a game like Asphalt 8, WWE immortals and more.

Andy emulator has proved that the emulator has come to market to stay on top. The emulator was actually for power, since their avid gamers out there and wanna try some serious gaming on their PC using the android emulator.

Andy Android emulator was kind of a fluke when it was released and why not, everyone learns from their mistakes so did Andy. Then they one again released their updated version which later on became one of the most used android emulators.

Andy supports few unique features, which you won’t find in other emulators from launchers to games. There are games which require joystick feature so you can use your mobile as the joystick and it supports 3rd part applications.

Genymotion is equipped with very good features which come in handy. If you have no interest in purchasing an Android device without testing it then install genymotion as it has several features which even rival bluestacks when compared.

Genymotion is the competition of bluestacks when compared in terms of speed, architecture, and graphics unit. Genymotion is not favorable if using it for frequent texting purpose. This cool android emulator can be downloaded for free. To access their premium you have to but their premium package.

Droid4X is considered the most powerful android emulator in the emulator store. Droi4x is all about power but it requires good configuration system PC, which has to be dual core running processor (Atom or Celeron Dual-core tends to lag) and RAM should be above 1.5GB with 512 Graphics card to run the Droid4X at maximum capacity.

you can experience lag-free gaming with some advanced features on Droid4X. It has very good stability and speed when you are playing games. You can imagine if the games running smoothly then how it would perform when using other applications like asphalt 8.

I have used Youwave for a while to test its features since you have is lightweight so it won’t put pressure on my old PC. Youwave is good for old configuration PC running Pentium 4 and Atom processor. It works smoothly on 32bit OS version Windows PC as well, however, I won’t recommend this emulator for gaming.

Where ever you search for, Xamarin is most unpopular android emulator which has all the features and quality to be on the top list, yet it is not famous (Blame the software promoters). Xamarin is kind of lightweight yet it does a great job.

Android emulators are famous because of their advanced features. No matter what are the reasons behind installing an android emulator but it indeed gives you a better experience when compared to the smartphone.

The reason, why bluestacks is on top because the software I standalone and it requires no external software. Where rest of emulators expect bluestacks require VIRTUAL BOX installed.

We have mentioned few android emulators many are not aware of if you think we have missed any emulator or you need suggestion then feel free to comment.